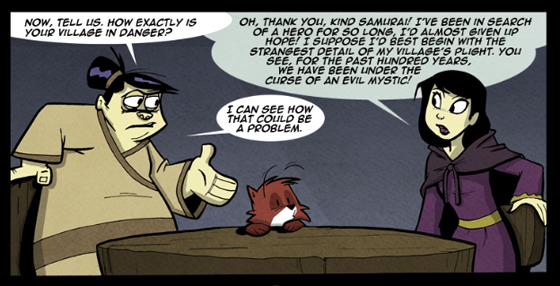 Comics Coast to Coast Episode 171: Adrian Ropp – To Infinity, and Beyond!

Two weeks ago we had the pleasure of sitting down with Adrian Ropp. Adrian was a guest on Comics Coast to Coast back on episode 128. At the time, his comic Chim Chum and the Portly Samurai was a black and white, single plane gag cartoon. Fast forward to today and Chim Chum has made the transition to a long form comic.

Adrian has also been extraordinarily busy as the lead storyboard artist on the new video game from Disney, Disney Infinity. With NDAs lifted with the games release on August 18th, we were able to talk to Adrian about both projects.

How to find Adrian and Chim Chum & The Portly Samurai:

Brian Dunaway was at Dragon-Con in Atlanta, Georgia last weekend and was able to sit down with our friends Tom Merritt and Len Peralta to chat about their recently successful Kickstarter comic project, Tenstate. You can get the skinny on their project from their Kickstarter video and find out where Tenstate is now by checking out the interview.

How to find Tom and Len and Testate.