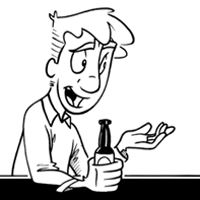 A few weeks ago I was approached by Starcrossed reader and fellow doodler Eric Holm to take part in a blog series he’s launching about art and inspiration. I am flattered to say that Eric is very kind in his words about my work. He also had some unique questions I had never run into before in an interview about creating art and comics. Eric will be publishing the the interview over several posts on his blog.

Inspiration – We Get Starcrossed!