The ‘What’s Going On’ Studio Update 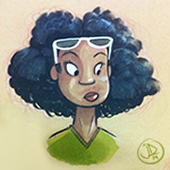 I need to apologize. It’s been quite a while since I’ve been able to post new artwork. I’ve managed to sneak in a quick sketch post to Instagram or Tumblr once or twice, but my schedule has not allowed me to post new Starcrossed comics. Readers have come to expect a certain level of quality with Starcrossed and I want to maintain that. Readers have also come to expect regular content, and this is where I have fallen short both in practice and in communicating the bottleneck. I’m hoping to fix at least part of this problem here. I’m working on getting back to regular updates but I wanted to fill everyone in on the squeeze on my time.

The main factor for the shift in my schedule has been the need for me to take on a part time job. While Starcrossed does bring in some light revenue (More on that later.) my main source of income is my professional freelance illustration and design work. Freelancing in any creative capacity can be unpredictable. Taking on a part time job is something I hope will help smooth out some of the hills and valleys of freelancing. In September, I was surprised by training that called for two and a half weeks of full time commitment. I had already taken on enough freelance work to fill my calendar for the month, which has bled over into October. The time commitment for my new part time job has returned to part time hours, but I am still away from the studio for four to six hours, five days a week.

Starcrossed is supposed to be a weekly comic strip. While this sounds simple and easy enough, over the past two years I have struggled with balancing the time it takes to write and draw Starcrossed with the time that my contract work requires to support my personal expenses. Once I have an idea, finalizing the gag and drawing Starcrossed takes a full uninterupted day in the studio. As fewer regular freelancing opportunities have been available, the time usually allotted for Starcrossed has been used to try to work on a number of small projects and to try to secure new contracts that make up the larger part of my income. I do get some free time, but it hasn’t been enough to post comics that I feel are my best work.

For those of you who have been generous enough to become Patron’s of Starcrossed by supporting my work through my Patreon page, first of all thank you. The current monthly contributions on Patreon are around $100 per month. Since I launched the Patreon in February, the digital strip (I’m not including book sales here.) has generated more direct online revenue in nine months than in the now almost five years since I launched the comic in November of 2009. That is because of you.

In the first week of October, the Patreon system billed all patrons for the previous month even though I was unable to post any new comic work in September. I would like to refund September contributions. Payment information on Patreon is private to your account. Please email me and I will refund your respective September contribution amount to your PayPal account.

I will be making some changes to the Patreon page in the near future. The tagline at the top of the page mentions both comics and podcasts but the rewards and goals are currently all comic based. Over the next few weeks I will include more rewards and goals related to The Citadel Cafe and my podcast work. I will also be posting on Patreon when new episodes are available. The Citadel Cafe returned from a scheduled summer break in September.

In other news, I will be attending the Halifax Pop Explosion Zine Fair on October 25th from 12PM to 5PM at the Bus Stop Theatre on Gottingen Street. I will have a table set up with books and prints available. And of course I will be sketching in and signing any books sold. The convention book price is $10.

Directions to the Zine Fair

I will also be speaking at Hal-Con on November 8th from 1pM to 2PM with my friends Doug Savage (Savage Chickens) and Nick Bradshaw (Marvel: Wolverine and the X-men, Astonishing X-men, Guardians of the Galaxy.) The panel is Promoting Your Work. More details about where I will be
Hal-Con weekend (Nov. 7th, 8th & 9th.) will be shared soon.

I want everyone to know that I really appreciate your patience as I reorganize my production schedule. I’m always available via email and social media if you want to get in touch. Stay tuned for a new blog post about a recent article for CollegeHumor released at New York Comic Con that I contributed to earlier this month. We’re talking about it tonight on a new episode of Comics Coast to Coast.